The Funko range of products is gigantic but there’s always been something missing from their illustrious line up. Fortuitously, this has been remedied with the release of two Pops from the iconic The Devil Wears Prada. Although it has happened at a thrillingly glacial pace you can now add Miranda Priestly and Andy Sachs to your collections or even let them stand alone in all their fashionable glory.

The outfit donned by La Priestly is the one the audience first sees her in as she struts through the lobby and emerges dramatically from the elevator. She wont be pleased though that her red and black accented shoes have not been replicated as they appear in the scene. Instead, the Funko version has matched the shoes to her purple…or should we say Byzantium coloured dress. Another oversight is on the infamous book itself, which is labeled as ‘Fashion’ rather than Runway as seen in the film. But the tiny sticky notes are a nice touch. 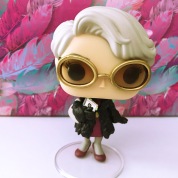 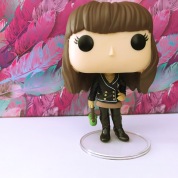 The Pop also includes the ever-present sunglasses and the most famous Miranda Priestly trademark – her perfectly coiffed white hair. We could probably send an email to Funko about the inconsistencies in the Pop but really…details of their incompetence do not interest us.

Andy Sachs, you’ll be happy to know, is represented in her makeover-outfit. Yes, complete with those Chanel boots. The hair colour on the Pop tends towards lighter scale but doesn’t detract from its overall appearance. She’s clutching the green purse just as she does in her entrance to the office but the overall outfit is lacking some of the finer details. Still, the detail that does exist such as the gold finish on the blazer’s buttons is nicely done with very little paint spillage.

In the immortal words of Miranda Priestly: That’s all.

To get all of your Funko needs fulfilled click below: