In the month of August two great things normally happen if you’re a fan of Formula 1. The first is the return of the world’s most elite racing series from its Summer break to the, arguably, the greatest circuit in the world, Belgium’s Spa-Francorchamps.

The second great thing that happens in August is the release of a new F1 gaming title. This year Codemasters, who’ve been in charge of the official F1 game for a number of years, released the much-anticipated title on the 25th of August.

I’ve been playing F1 titles for a long time. We’re talking from pre-Pentium PCs and PlayStation 1 here and because of this I love the finer details that are included in these titles. For example, in F12017, as your car is readied to leave the pit garage the engine is blipped slightly and when you open the DRS, on track, the volume of the woosh of the air increases. I especially appreciate the texture of the tyres too, which look so realistic that if you were to your finger over them on the screen they’d probably feel like very expensive Pirelli rubber. These are the smaller details that can and does elevate a game.

While the core of F1 2017 is the racing Codemasters have packed so much more into the experience. The biggest draw card of F1 2017 is undoubtedly its career mode. As a female gamer the fact that you can now select a female avatar is no small thing. It says that Codemasters considers all their gamers important and it’s a classy move from them.

Once you’ve selected your avatar of choice and customised your helmet you’re set to commence your, hopefully illustrious career in Australia. Career mode retains some aspects from its 2016 predecessor such as meeting the team’s expectations and beating your rival. Likewise, the practice objectives too have been retained but in 2017 they’ve been fleshed out more with added programs such as fuel saving and race strategy sims. These aren’t just for show either as they earn you valuable resource points which you put towards the development of the car.

Similarly, you have to manage all six elements of the power unit (internal combustion engine, MGU-K, MGU-H, control electronics, energy store, and turbo) as well as the gearbox. Overstress the components and you’ll soon have a more in-depth understanding of McLaren has been going through. This aspect of career mode demands for the gamer to make strategic calls on, firstly, management, and secondly, on when the most opportune time to fit new components is; fitting a new gearbox before its run its compulsory six races will result in a grid penalty and may not be the best decision ahead of the Monaco grand prix. 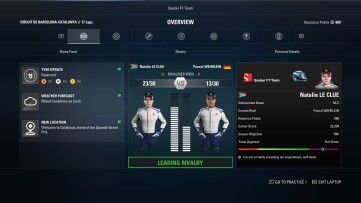 It’s not only your own team’s expectations that are important either. Other teams in the paddock are also tracking your results and performances. If you’re looking for a drive higher up the grid you’d best keep an eye on the opinion meter as it’s sure to give you a good indication as to where your next offer will come from.

In between the season’s races there are invitational events, which allows you driver one of the twelve classic cars included in F1 2017. These events are merely a bit of fun and don’t gain you any resource points. The classic cars are also available via the Time Trial and Grand Prix game modes. The classic cars included range from, amongst others, Mika Hakkinen’s 1998 championship winning McLaren, Ayrton Senna’s McLaren MP4-4, Nigel Mansell’s Williams to Fernando Alonso, Kimi Raikkonen, and Lewis Hamilton’s title winning cars. But by far the most majestic of the classic cars is Michael Schumacher’s Ferrari F2004. It’s the car with which he won his seventh world title and though this is just a game the sense of history that I got from driving this car was enough to form a lump in my throat. It’s beautiful and Codemasters could not have done any better in paying homage to the great history of this sport.

On a more technical aspect F1 2017 delivers stunning graphics from the cars and to the revamped paddock area and the circuits. While the tracks are not laser scanned they nevertheless provide detailed and accurate representations of the circuit’s frequented by Formula 1. The physics of driving a 2017 car is spot on. Initially, the level of grip is mind-blowing but nevertheless accurate and makes you feel pretty arrogant when throwing the car into corners. But, be warned, a 2017 F1 car does not like to be out of position when turning and if you are you’ll be swopping ends before you know it.

The AI of F1 2017 has been improved dramatically too. Now AI drivers wont simply be scared off the racing line but instead fight tooth and nail for their position. Also, AI drivers are no longer infallible and actually make mistakes, which again adds to the realism of the title. The only criticism of F1 2017 is probably the sound of the engines, which sound a bit flat in comparison to their genuine counterparts. But this is a minor issues and certainly not one that is going to detract from how much you’ll enjoy F1 2017.

It’s as if through all of their previous F1 titles Codemasters were building towards something truly exceptional and they’ve delivered, spectacularly, with F1 2017.