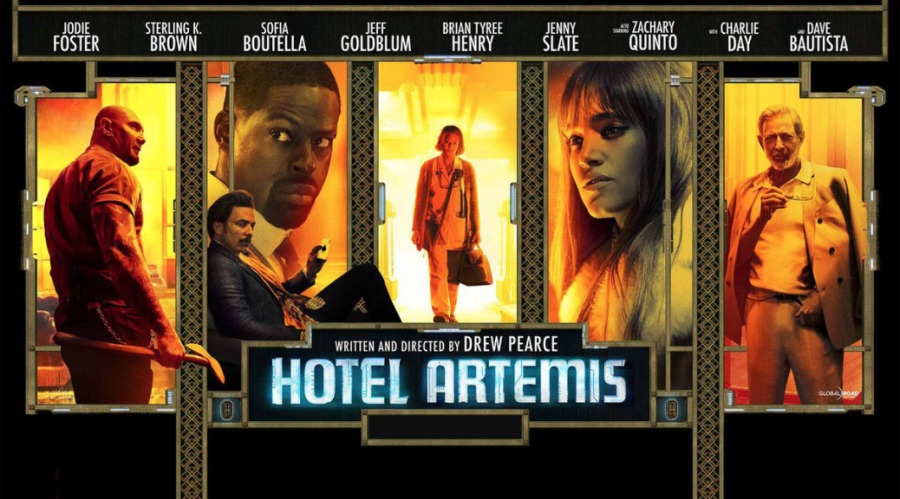 Hotel Artemis centers around a downtown hotel turned a members-only hospital for criminals and is set in 2028’s version of Los Angeles that is mangled by riots.

In a movie-going world exceedingly saturated by sequels, prequels, and re-makes Iron Man 3’s Drew Pearce, as writer and director, has produced a film with a level of originality that has become unfamiliar to audiences. But while its original plot and a quality cast allows Hotel Artemis to start out with a lot of potential it ultimately falls slightly flat.

After the initial set up you spend much of the film waiting and wanting to learn more about the characters. However, you’re only rewarded with crumbs when there is the distinct feeling that someone is hiding the loaf of bread somewhere. Jodie Foster makes a longed-for return to the big screen as the world-weary and damaged Nurse that runs the hospital. Her performance reminds audiences what they’ve been deprived of since the last Foster-starring flick. In Hotel Artemis even Foster’s superb ability to assimilate into the character and to strike at the core of it is often weakened by the failure of the plot to build on the drama.

The dialogue is snappy and often comically sharp and besides the marvelous performance turned in by Foster Dave Bautista, as health care professional Everest ads a nuanced levity to it all. The cinematography, by IT’s Chung-hoon Chung, is perfectly analogous to the overarching theme of the film. It exudes atmosphere and has ambiance that is strikingly reminiscent of the comic book trope.

The film is rather anticlimactic but it’s a visual treat with a bold and original plot. And it’s salvaged by its own ambiance and Jodie Foster’s portrayal of the weary keeper of the Hotel Artemis.