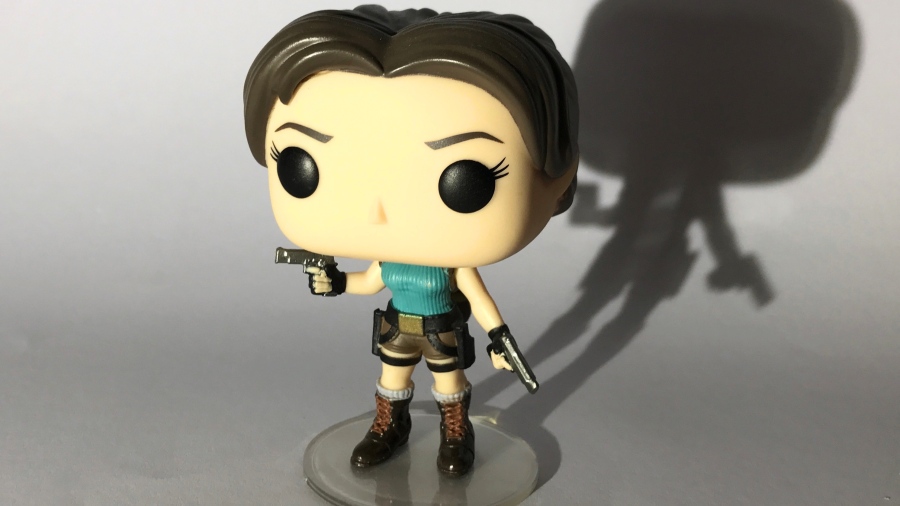 Lara Croft is, arguably, one of the most iconic gaming characters ever created. Tomb Raider and its vast range of titles has continued to capture the imagination for decades but this phenomenon isn’t only restricted to the gaming titles.

So famous is Lady Croft that she has spawned an entire range of merchandise from comic books to ceramic mugs and everything in between. While the collectible figures of Lara Croft has delivered some stunning pieces there was one company that had not yet added the intrepid archeologist to their vast collection. Fear not, for Funko have finally added Lara to their impressive list of licenses and she’s a real treat.

As this is Funko’s first Lara Pop I was glad to see that they opted for the classic outfit of the blue-ish tank top and the khaki shorts. The blue of her shirt is also the correct hue, tucked neatly into the short and even sports some textural detail. The short aren’t completely visible as her gun holsters mostly cover them. That’s right Lara has two Desert Eagles but instead of burying them in the holsters Funko opted for dynamic pose and instead placed them in Lara’s hands, where she also dons a pair of black, fingerless, gloves. The sculpt of the guns are acceptable but lack a bit of attention to detail.

Her favourite combat boots adorns Lara’s feet; complete with light brown laces and with the socks every so slightly peaking out of the top. The sculpting on the boots are some of the best on the entire figure. Although Lara’s combat boots appear quite sturdy the figure comes with Funko’s transparent base in order to ensure it doesn’t topple over, if you’re displaying it out of the box.

It simply wouldn’t be Lara Croft if she didn’t have her strangely enormous backpack; let’s face it Lara can fit anything in there. Funko has molded this nicely too with a little side-pocket and clasp and even tiny buckles on the shoulder straps.

Besides being more than chuffed to have the entire figure in my collection my favourite part of it has to be the hair. If I tried I probably couldn’t count all the hours I’ve spent trying to get Lara through the various obstacles and challenges on PlayStation and PC. And through it all one of the most recognizable features of Lara has been her ponytail. Funko didn’t skimp here as they perfectly captured Lara’s long braid complete with two hairbands. The manner in which the hair gathers too is rather impressive.

If you’ve been a fan of Lara Croft at any stage of your life you’ll love this figure.